The fifth annual Moorbennhall Charity Ball, organised by Andrew Bennett and Calvin Moore (pictured below with TV star Denise Welch), will be held at the luxury hotel near Durham on Saturday April 16th. 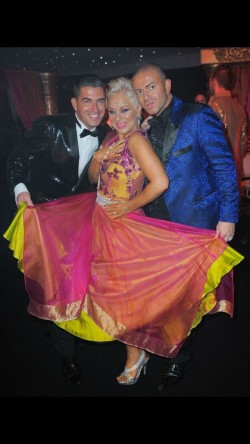 Proceeds from the black tie ball, which has a filthy rich and fabulous dress code, will be donated to Rochdale-based charity, GEM Appeal, which funds research into genetic diseases affecting children across the UK. To date, The Moorbenhall Charity Ball has raised £50,000 for the appeal and charity patron Denise Welch is also expected to attend this year’s event to show her support.

Event organiser, Andrew Bennett, said: “Calvin and I attended a fundraising event for the GEM Appeal many years ago and were really touched by the charity’s efforts to help children and their families struggling with genetic disorders and inborn errors of metabolism. Establishing The Moorbennhall Charity Ball seemed like a natural extension to our own work among young people with learning disabilities and we’re delighted to have raised such a significant sum over the past four years.”

Bronze tickets for The Moorbennhall Charity Ball at Ramside Hall Hotel are priced at £50 per person, including limited seating and a drink on arrival.

A Silver option is also available at £65 per person, with the addition of a wine package, while top tier Gold tickets, incorporating preferential seating and a goodie bag, are priced at £85 per person.

For more information, or to book, call Entertainment Today Events Ltd on 0161 4840876 or email info@entertainmenttoday.co.uk