A new partnership has been launched between a young persons’ club and a growing North East business.

The AGP will cost almost £750,000 and the club is currently applying to The FA and The Football Foundation to invest £500,000 alongside £250,000 the club has committed. After this, it intends to build on top of its existing changing rooms to create a multi-functional youth centre, which will provide education, health seminars and a community activity space. This “Phase Two” of the developments will also cost a further £750,000 and will be financed through Social Investment.

The club has notably produced more than 80 professional footballers, including seven internationals such as Alan Shearer, Peter Beardsley and Michael Carrick. It is also still a draw for a famous sporting face or two. Paul Gascoigne regularly enjoys watching his nephew Cameron play for the Under 16 team.

But, with such significant developments planned, Chairman Steve Dale decided to call on the expertise of one of the club’s parents to offer some advice on minimising costs as the club expands.

The County Durham-based business specialises in reducing outgoings and set about immediately reducing Wallsend’s fixed contract terms, saving the club almost 30% on its electricity expenditure and nearly 50% on its gas expenditure. Beyond this, GAS is now assessing the club’s other expenses and offering further consultancy to make it as efficient as possible, helping to add much-needed savings to the club’s bottom line.

To celebrate the start of the partnership, GAS has subsidised the club with the purchase of winter rain jackets for its 500 players, which all age groups wear for training and travel to games.

Mark said: “We have a strong reputation for both helping businesses become more efficient and supporting grass-roots sporting organisations in the North East.

“Bradley Groves, our Chief Executive, also owns Spennymoor Town FC and has done a lot for other sporting teams including Hetton Lyons.

“I was confident GAS could offer some value and we’re now working together to make the new premises as efficient as possible, so when they’re built they run like a dream and the club doesn’t waste a penny from day one.

“They provide a superb standard of coaching and organisation, but it’s important to remember that the club is a registered charity and despite its vast reputation, it still relies on the support of the community and that’s something that we believe in at GAS.”

Steve Dale, Chairman of Wallsend Boys Club, said: “This partnership is about more than a traditional donation from a business to a junior team. Our relationship with GAS will help us into the future and ensure we are as lean and efficient as possible.  We’re about more than football, so the work we’re doing on our procurement and efficiency measures will benefit all young people who use the club’s facilities.

“I’d like to personally thank Bradley Groves and Mark for the work they’re putting into making Wallsend Boys Club cost-efficient for the future. There have been times when we’ve been concerned for that future, such as after the demolition of our old headquarters in 2012 when it became unsafe.  But thanks to the likes of GAS and our other supporters, of whom there are many, we are in an exciting position at the moment.

“Phase one of the developments alone could push us up to more than 70 teams, which will allow us to significantly improve transitions into adult and semi-professional football for our talented youngsters.” 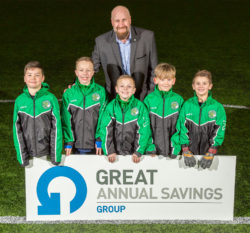 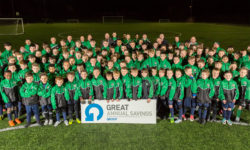